On Friday, Nov. 6, at the final event of the Erie, Pa. Jefferson Educational Society Global Summit VII, John M. Ferretti, DO, President and CEO of LECOM, and Silvia M. Ferretti, DO, Provost, Vice President and Dean of Academic Affairs at LECOM, were presented the Thomas B. Hagen Dignitas Award. The award is given to Erie citizens who have made a profound impact on society. The award was presented by Thomas B. Hagen, the award’s namesake. 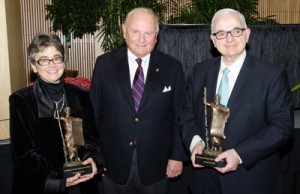 In presenting the award, Mr. Hagen noted that Drs. John and Silvia Ferretti were instrumental in the founding and success of Lake Erie College of Osteopathic Medicine (LECOM). As one of Millcreek Community Hospital’s chief administrators, Dr. John Ferretti led the campaign to create the hospitals own medical school. Dr. Silvia Ferretti became the school’s first dean – and first woman dean to serve any osteopathic medical school. LECOM was founded with the goal to provide local, quality, and affordable healthcare in Erie and across the nation, and is a leader in the teaching and practice of progressive, preventative, and whole-person medicine.

The Jefferson Educational Society Global Summit is an annual event that brings the leading experts in science, education, healthcare and politics to Erie.  Following the award presentation, medical historian Norman Gevitz, Ph.D., presented a lecture on the inception and evolution of osteopathic medicine through seven generations of DOs. Dr. Gevitz is currently a professor and Vice President of Academic Affairs at A.T. Still University.