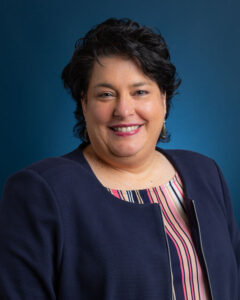 Ogden joined LECOM in June 2008 and has served as associate dean of the School of Pharmacy since 2011. As a faculty member, she initiated pharmacy practices services in long-term care and ambulatory care at the LECOM Institute for Successful Aging. In 2012, she started the PGY2 geriatric residency program and served as its director until 2015. Ogden also oversaw LECOM’s 2016 strategic plan and initiatives related to student success. In 2018, she received the LECOM School of Pharmacy’s inaugural Morris and Faye Bell Award for Commitment to Student Success.

In her new role, Ogden will be responsible for all academic matters related to the LECOM pharmacy program, which encompasses operations at the Erie and Bradenton, Florida, campuses, and within the Distance Education pathway.

“Dr. Ogden brings to this estimable position her LECOM history, her rich education, her abundant experience and, most importantly, her energy and keen vision to carry the LECOM School of Pharmacy into a new transformational age,” said Ferretti.

With an extensive background in geriatric pharmacy and more than 30 years’ experience in pharmacy and healthcare administration, Ogden has worked in a variety of settings spanning community practice, acute care and long-term care. Before joining LECOM, Ogden served as director of pharmacy for Grove City Medical Center and was co-owner and executive director of pharmacy services for Full Circle Solutions, a long-term care consulting firm. Ogden has spoken nationally on topics related to the care of the institutional elderly and nursing home administration.

Ogden holds a Bachelor of Pharmacy degree from Duquesne University and a Doctor of Pharmacy (Pharm.D.) degree from the University of Florida. She also earned Master of Science in Medical Education (M.S.M.Ed.) and Masters of Health Services Administration (M.H.S.A.) degrees, both from LECOM. Ogden is a board-certified geriatric pharmacist and serves on the Educational Advisory Council and the Pharmacy Educators and Research Council for the American Society of Consultant Pharmacists. She completed the American Association of Colleges of Pharmacy Academic Leadership Fellows Program in 2014.

Launched in 2002, the LECOM School of Pharmacy offers innovative, student-centered education to nurture the next generation of pharmacists who are prepared to become valuable members of the healthcare profession. More than 3,000 students have graduated from the program at campuses in Erie and Bradenton.