This fall, a member of LECOM’s faculty, as well as a LECOM alumnus, were presented with prestigious awards during the 2017 Osteopathic Medical Education Conference. 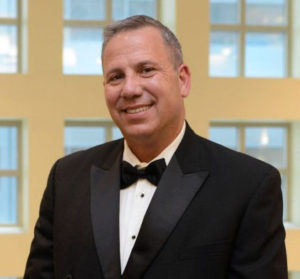 The American Osteopathic Foundation (AOF) named Richard Terry, D.O., as the 2017 recipient of its W. Douglas Ward, Ph.D., Educator of the Year Award, one of the organization’s highest honors.

The Educator of the Year designation recognizes osteopathic teachers who display not only the highest standards of excellence, but also an unwavering dedication to the tenets of osteopathic medicine and a true passion for passing those tenets on to future generations of D.O.s. Recipients have had a significant impact on the academic advancement of osteopathic students and have made long-standing contributions to the profession in the academic arena.

Dr. Terry is an Assistant Dean of Regional Clinical Education at LECOM and the Chief Academic Officer of the Lake Erie Consortium for Osteopathic Medical Training (LECOMT), where develops regional campuses and training sites that combine undergraduate medical education with graduate medical education training. He is intimately involved in the teaching of the osteopathic philosophy to students and graduate physicians. 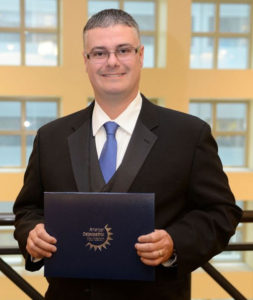 Additionally, the AOF and the American College of Osteopathic Obstetricians and Gynecologists (ACOOG) have named Bryan Sweeney, D.O., as the 2017 Outstanding Resident of the Year in Obstetrics & Gynecology.

Dr. Sweeney is Chief Resident of the OB-GYN residency at Midwestern University/OPTI: Presence Resurrection Healthcare Consortium, where he stands out as an example for his fellow residents. He graduated from LECOM at Seton Hill in 2014, and was named “Intern of the Year” during his PGY-1 year. Colleagues say that what sets him apart is his character and demeanor of kindness and compassion.

The Outstanding Resident of the Year Award recognizes the best and brightest DO residents in postdoctoral training programs across the country. These outstanding trainees show a unique combination of clinical promise, leadership, dedication and commitment to osteopathic patient-centered care that truly sets them apart from their peers. Many go on to become national and world leaders in health care or research.