Thursday, 08 May 2014
Arthur De Luigi, DO, and Brian Juriga, DO, Experience ‘Thrill of a Lifetime’

Lake Erie College of Osteopathic Medicine (LECOM) graduates Arthur De Luigi, DO, and Brian Juriga, DO, experienced the thrill of a lifetime when they served as part of the medical staff for the United States during the Sochi 2014 Paralympic Winter Games, the multisport competition for athletes with disabilities.

Dr. De Luigi served as head team physician and medical director for the U.S. Paralympic Alpine Ski and Para-Snowboarding teams, and Dr. Juriga served as a physician for both teams. Dr. De Luigi and Dr. Juriga, longtime friends and roommates while they attended LECOM, were stationed at Rosa Khutor Alpine Resort in Krasnodar Krai, Russia. The United States sent about 30 alpine skiers and 10 snowboarders to the Paralympic Winter Games. 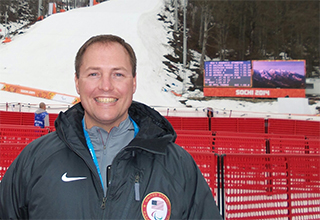 Dr. De Luigi, a 2001 LECOM graduate, and Dr. Juriga, Class of 2002, were in Sochi for almost four weeks and typically began their workday as early as 4:30 a.m. Despite the long hours, travel, and extended time away from their families and their medical practices, they are grateful for an opportunity many physicians can only aspire to.

“The Paralympic Games are a celebration of the achievements of athletes who have overcome so much adversity, in terms of fighting through their disabilities,” said Dr. De Luigi, Director of Sports Medicine and Program Director of the Sports Medicine Fellowship at MedStar National Rehabilitation Hospital and MedStar Georgetown University Hospital in Washington, D.C. “The fact that the Russian people were such wonderful hosts and were very supportive of the athletes made it that much more enjoyable. It was an amazing experience.”

Said Dr. Juriga, the Director of Sports Medicine at Lake Health Sports Medicine in Cleveland, “It was such an honor to represent our country and it was so inspiring to play a part in helping these phenomenal athletes. We watched them in awe as they competed. They are the elite of the elite in their sport.”

Dr. De Luigi and Dr. Juriga had worked with the United States Skiing & Snowboarding Association (USSA) in prior international competitions. The 2014 games were their first time serving on the medical staff for the United States in the Paralympics, however. They both had had to be approved by the United States Olympic Committee (USOC).

In addition, prior to the Sochi games, they had to complete a rotation with the skiing and snowboarding teams, during which they were evaluated and their performances graded by coaches and USOC officials. “Serving as a physician for this level of competition is definitely not a ski vacation,” Dr. De Luigi said. “We had to be completely accessible to the athletes at all times. To serve with the teams is truly an honor and a privilege and a responsibility that has to be taken very seriously.”

Dr. Juriga and Dr. De Luigi worked closely with the team members before, during, and after their scheduled competitions. “We would treat their knees, backs, necks, or whatever may have been troubling them,” Dr. Juriga said. “At times, we would help them with stretching and staying loose. Our goal was getting them as healthy and as prepared as possible for their next run.”

Adaptive athletes can’t be treated like other athletes, Dr. Juriga noted. “Some of them have had to learn how to make one leg essentially function as two,” he said. “As a physician, you have to be aware of how their body tends to compensate for their disability and where they may be more susceptible to injury as a result. We develop their training regimens and their rehabilitation based on the areas of the body where they need to be the strongest.”

During the Games, Dr. Juriga and Dr. De Luigi had to treat a number of injuries. Some of them were serious, including a spinal fracture and hip fracture. Many of them, including several concussions, were partially the result of less than ideal conditions on the mountains, Dr. De Luigi said. “It was warmer than normal and the snow would get a little slushy and ragged, especially in the areas that were exposed to the sun,” he explained. “A number of the competitors didn’t finish the course.”

In spite of the conditions, several Americans turned in medal-winning performances. In snowboarding, Americans Evan Strong, Michael Shea, and Keith Gabel took the gold, silver, and bronze, respectively, and Amy Purdy won the bronze in women’s snowboarding. Dr. Juriga and Dr. De Luigi shared in the excitement of the athletes who took home medals. “I can’t put into words what it means when an athlete comes off the podium and says they couldn’t have done it without you,” Dr. Juriga said. “That alone made it worth the sacrifice, especially when we know what they go through in their training. The Paralympics isn’t like other sports, where if you get hurt or have a bad day, you get another chance the next week or the next month. These athletes have to be ready for an opportunity that comes along once every four years.”