I was born and raised in Erie, PA. I earned a BS in Biology from Gannon University. During my junior and senior years at Gannon, I worked as a Teaching Assistant in a Physiology lab and a Research Assistant studying the endocrine function of cardiac muscle. These experiences sparked my interest in Teaching and Research and motivated me to pursue a Ph.D. in Anatomy & Neuroscience at West Virginia University. In graduate school, my research focused on the structure and function of the mammalian auditory brainstem. I started at LECOM in 2002 as an Assistant Professor of Anatomy and started the Auditory Research Center in 2004. Our research has spanned animal models to humans and utilizes morphological, behavioral, and physiological techniques.

My hobbies include running, triathlons, swimming with my chocolate lab Ringo, drawing, and video games. I love food. All of it. Except for green beans. My favorites are thai, chicken wings, and burgers.

The mission of the LECOM Auditory Research Center is: 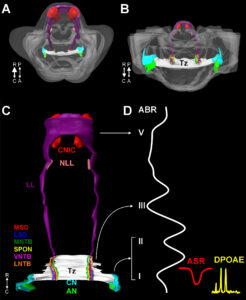 Using the auditory and vestibular pathways as model systems, investigate structure and function of the nervous system in health and disease. The goal of our research is to guide implementation of non-invasive screening tests, early interventionsand enrichment strategies.

We are currently pursuing our mission through two aims:

The mechanisms we use to code complex features of vocalizations and localize soundsin our environment are not completely understood. We are studying theneural circuits utilized for these functions in both humans and animal models. Specifically, we are mapping synaptic inputs onto brainstem, thalamic and cortical neurons that integrate information from both ears. We have recently identified a novel, long-range axonal projection to the thalamus that we hypothesize plays an important role in how the brain codes complex sounds like speech. We are characterizing this circuit in an animal model using a variety of techniques.

Autism spectrum disorder (ASD) is a neurodevelopmental condition associated with social, communicative, and behavioral difficulties. Beyond these core features, most people with ASD have difficulty with hearing, balance, and coordination. The hearing issues in ASD range from deafness to hypersensitivity and this is usually complicated by tinnitus and/or difficulty listening in noisy environments. Consistent with these functional impairments, we have demonstrated consistent brainstem hypoplasia in human subjects with ASD.

Together, these observations support our hypothesis that auditory and vestibular dysfunction in ASD results from both structural and functional aberrations involving brainstem circuits.

Prenatal exposure to the antiepileptic valproic acid (VPA) results in elevated risk of having a child diagnosed with ASD. We use timed VPA exposure as an animal model of ASD and we are currently using a wide repertoire of techniques to study neuronal morphology, connectivity, neurotransmitter profiles, function, behavior, and neurophysiological changes in this model.

Much of our understanding of how the brain codes sound is derived from animal studies. However, virtually nothing is known about how neurons in the human auditory brainstem integrate inputs from both ears and use this information to map our auditory environment. We are using quantitative morphometrics and immunohistochemistry to explore how excitatory and inhibitory inputs are distributed and integrated at coincidence detector neurons in the human medial superior olive.

We are also conducting a series of experiments using stereotaxic injections of retrograde and anterograde axon tracers in combination with immunofluorescence to study novel auditory circuits from the brainstem directly to the thalamus. This novel inhibitory projection likely plays a role in coding complex temporal features of vocalizations.

Animals prenatally exposed to VPA have significantly fewer neurons throughout their auditory brainstem, hyperactive responses to sounds, abnormal neurochemical signatures and reduced axonal projections to the auditory midbrain and thalamus. We continue to dissect the structural and functional changes in this model and explore enrichment strategies with the following projects:

We are using auditory brainstem responses to characterize how sound is coded and relayed through the brain. We are studying how this coding changes with age and how these changes can be influenced by music stimulation and environmental enrichment.

We have examined many different components of the main auditory stream to the thalamus. However, we do not understand how the brain integrates auditory and somatosensory information and how this might be affected in animal models of ASD. We are studying neurons in the auditory and somatosensory regions of the cerebral cortex and how these different cortical regions integrate along a descending projection to the inferior colliculus.

Animals exposed to VPA in utero also have fewer neurons in their cerebellum and demonstrate ataxia on several motor tasks. We hypothesize these changes result from fewer neurons, abnormal circuits and function in vestibular brainstem circuits. We are investigating this hypothesis using a combination of morphological, immunohistochemical, functional, behavioral, and neurophysiological techniques.Further, we hypothesize these motor deficits result from abnormal circuits in the spinal cord.

Functional role of glycinergic inputs to the auditory thalamus

Characterization of auditory and vestibular alterations in genetic models of ASD

Select publications: (we will provide links to abstracts)