A. Determine the effects of developmental disorders and prenatal teratogen exposure on structure and function of the auditory system. We are approaching this objective with two projects: 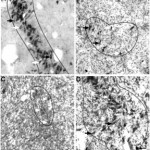 MSO in Autism: Shown in panel A in the figure to the left is an example of neurons from the medial superior olive [MSO] from an 8-year-old male. Note that MSO neurons are typically fusiform in morphology and arranged in a thin, vertical column. Shown in B and C is the MSO from 8 and 2 -year-old males diagnosed with autism, respectively; shown in D is the MSO from a 9-year-old female diagnosed with autism. Note that many fewer neurons are present in the autistic brains and the abundance of glial cells [small dots]. Overall, in examination of brainstems from 14 individuals diagnosed with autism, we find significantly fewer neurons in the MSO [and SOC] and that the neurons in the autistic SOC are smaller and rounder. Interestingly, we find many of the same malformations in rats prenatally exposed to valproic acid, an anti-epileptic with known teratogenic qualities.

B. Determine the effects of age and sensory deprivation on the structure and distribution of perineuronal nets (PNN), specializations of the brain extracellular matrix. 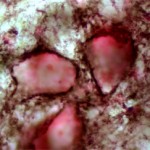 PNN surround cell bodies and dendrites: Shown in the figure to the left are neurons from the rat brainstem stained for cell bodies [red] and PNN [black]. Note how the PNN form a glove-like covering over the cell body and primary dendrites We have shown that the postnatal development of PNN is closely related to the onset of hearing, suggesting that the presence of PNN indicate the close of the critical period, a time when the nervous system is highly plastic. 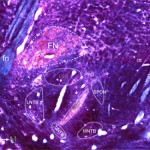 Organization of the Human SOC: Shown in the image to the left is a brainstem section, stained for cell bodies [red] and myelin [purple/blue] through the human pons showing the constituent nuclei of the human superior olivary complex. Despite significant interspecies variability, we have shown that the human SOC contains many of the same neuron-types and cell groups found in laboratory animals.