LECOM is the nation’s largest medical college and, with Millcreek Community Hospital and the clinical practices of Medical Associates, forms America’s only osteopathic Academic Health Center.  With campuses in Erie and Greensburg, Pa., as well as Bradenton, Fla., LECOM shares in the Pirates commitment to both Western PA and the City of Bradenton, making the educational institution a natural partner with the Pirates in Bradenton.

“LECOM Park is our organization’s southern home and we are proud to announce this agreement with a respected and established brand that has roots in Western Pennsylvania and has quickly become a leader in education in the Bradenton area,” said Pirates President Frank Coonelly.  “LECOM shares our mission to help develop young people into highly trained professionals so that they can pursue their dreams.  LECOM also shares our commitment to community and we look forward to partnering with LECOM to continue to invest in improving the lives of others in our Bradenton community.”

“The need to b 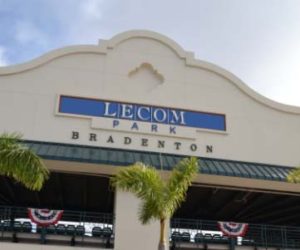 ring new health care professionals to Florida drew LECOM to Bradenton where we found a welcoming community spirit that included the Pittsburgh Pirates,” said LECOM President John M. Ferretti, DO. “This is an opportunity to encourage wellness and health in this community as we prepare a new generation of physicians, pharmacists and dentists to meet the growing health care needs in Florida and across the nation.”

As part of the announcement, the Pirates unveiled the new LECOM Park videoboard.  The new videoboard, which has an active screen size of 25.2 feet high by 45.6 feet wide, is yet another step that the City of Bradenton and the Pirates have taken together to enhance the fan experience at LECOM Park.  It will allow for high definition video replays, active batting line-ups, as well as display pitch velocity and other statistical data.

In addition, the Pirates announced the recently constructed home clubhouse at LECOM Park will now be known as the Bill McKechnie Home Clubhouse to continue to recognize and honor the Pittsburgh-area native, former Bradenton resident and Hall of Fame manager Bill McKechnie.  In 2015, the Pirates opened the newly renovated one-story 22,500 square foot clubhouse as part of a major capital improvement project to LECOM Park.