Oral anticoagulants are among the most commonly prescribed medications in the United States and may be used for thromboprophylaxis in atrial fibrillation (AF) or venous thromboembolism (VTE).1 For many years, warfarin has been the preferred oral anticoagulant available for stroke prevention in AF or prophylaxis/treatment of VTE. However, 2010 marked the beginning of the expansion of therapeutic options for oral anticoagulation, which now includes dabigatran, rivaroxaban, and apixaban (Table 1). 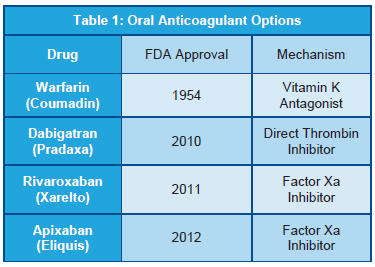 These agents, commonly referred to as the new oral anticoagulants (NOACs), offer many advantages to traditional warfarin therapy. Unlike warfarin, which exerts its effect indirectly through depletion of vitamin K-dependent clotting factors in the liver, the NOACs utilize direct mechanisms of action, allowing for simplified pharmacokinetics and fewer drug, disease, and food interactions.2 Not only do the new agents offer short onset and offset of therapeutic effect, but they also yield consistent therapeutic efficacy without the need for laboratory monitoring, in contrast to warfarin which requires regular international normalized ratio (INR) monitoring to assess for therapeutic efficacy. As a result, the NOACs have garnered attention regarding their possible replacement of warfarin as the mainstay of oral anticoagulant therapy.

Despite the many advantages to their use, the new NOACs come at a significantly higher cost to the patient than warfarin, which is available as a generic and boasts a cash price of less than $5 for a 30-day supply. In contrast, depending on prescription insurance the out-of-pocket costs for the three new agents may range from a copay of $40-60 for a 30-day supply to a cash price exceeding $3003-4 (Table 2). Warfarin requires routine monitoring of the INR to ensure patients are adequately anticoagulated and to monitor for increased risk of bleeding associated with an elevated INR. In the average patient, the INR is monitored every 2-4 weeks,5which can be both costly and burdensome to the patient. As a result, it has been proposed that the NOACS present a more cost-effective therapeutic option from both a direct cost and patient quality of life perspective.6

Review of the Current Economic Literature

Although the NOACs appear to be similar or more cost effective in a general sense, it is important to consider differences in efficacy or adverse event rates. Numerous trials have been completed to evaluate differences between the new and traditional agents.

A review of the current literature suggests that the NOACs are at least as effective as traditional warfarin therapy, when used for FDA-approved indications. Phase III clinical trials for the new agents demonstrated that dabigatran (RE-LY, 2009) and apixaban (ARISTOTLE, 2011) were more efficacious at preventing stroke in non-valvular atrial fibrillation than warfarin,7,8 while rivaroxaban (ROCKET-AF, 2011) was shown to be non-inferior to warfarin.9 A meta-analysis of these three trials demonstrated reduced risk of stroke and all-cause mortality with the new oral agents versus traditional warfarin therapy.10 While it is difficult to assign a monetary value to this data, reduction in stroke and mortality is a significant cost benefit to the use of the new oral agents and, at the very least, allows the NOACs to be compared equally from a cost of efficacy perspective.

Adverse events also contribute significantly to the overall cost of a therapeutic agent. Anticoagulants of any type are associated with bleeding events, such as gastrointestinal (GI) bleeding or intracranial hemorrhage (ICH). Although rare, hospitalization and associated costs from these bleeding events can range from $24,129 per patient for a mild GI bleed to $41,903 per patient for a major ICH.11 However, the NOACs have been shown to all have a reduced risk of ICH, which is the adverse effect associated with the highest cost.12 Despite improved rates of ICH, dabigatran is associated with an increased risk of dyspepsia and GI bleed by as much as 10%,2 which may increase adverse event-related cost, while apixaban is associated with an overall lower rate of major bleeding, both intracranial and extracranial.8 Rivaroxaban shares a lower rate of ICH with the other NOACs but does not offer any unique advantages or disadvantages related to adverse effects that have been identified.9

In addition to comparable or potentially improved efficacy, evaluation of the economic cost between the agents indicates that the NOACs offer reduced ICH bleeding events (though increased dyspepsia and GI bleed with dabigatran) and improved overall quality of life. According to Harrington et al., the new oral anticoagulant agents are more cost effective alternatives to warfarin therapy; specifically, the trial concluded that apixaban was the most cost effective anticoagulant therapy option with respect to quality adjusted life years (QALY) due to lack of monitoring and fewer adverse bleeding events.6

This review of the current economic literature suggests that use of the NOACs is supported by efficacy, safety, and for some patients economic considerations. As with all medication therapy, the choice of an anticoagulant should be determined by considering the individual patient. A patient with a history of dyspepsia or GI bleed may be at a higher risk of having an adverse event with dabigatran. This may result in increased direct health care cost or in a patient who is noncompliant with therapy leading to a thrombotic event that could result in extensive healthcare and social costs. It is important for the prescriber to be familiar with the overall features of each of the available oral anticoagulants in order to have a candid conversation with their patients regarding efficacy, adverse effects, and associated costs.

Although NOACs have been touted as not requiring therapeutic monitoring, parameters must still be followed to ensure safety. Patients prescribed any anticoagulant should have a complete blood count (CBC) every 6 months to monitor for bleeding. Due to the elimination of the new oral agents, renal and hepatic function monitoring is recommended as clinically indicated (generally once annually) depending on the agent (Table 3). While renal and hepatic function tests are often performed regardless of anticoagulation therapy, it is important to consider this additional cost to an otherwise healthy patient who may not require such monitoring.

Lack of adherence to prescribed therapy can result in a greater risk for adverse events with the NOACs. The half-lives of these agents are significantly shorter than warfarin,2 which means the therapeutic effect of the drug is faster to decline following a missed dose. Unlike warfarin, which takes an average of 4-5 days to return to baseline following discontinuation,13 a single missed dose of the NOACs could increase the patients risk for a thromboembolic event. Conversely, warfarin requires bridge therapy with a low molecular weight heparin (LWMH) such as enoxaparin for the first 5 days of warfarin therapy, which results in added costs to the patient.

Additionally, a patient who takes more than the prescribed dose of the NOACs will not have an available reversal agent in the case of a bleeding event. Similarly, if a patient experiences an emergency bleeding event, such as trauma, or requires emergency surgery, a specific reversal agent is not available to return the patient to a normal coagulation level. While warfarin is easily reversed with vitamin K, overdose or bleeding events while taking one of the NOACs can only be treated with prothrombin complex concentrate (PCC) or fresh frozen plasma (FFP), which are costly agents that may not be associated with beneficial outcomes (Table 4). Dabigatran specifically is only removed via dialysis and apixaban may be reversed with the use of activated Factor VII, however, clinical trials have not been performed to date to evaluate this association. Each of these reversal options is costly and may require hospitalization, while supratherapeutic warfarin levels can be easily treated with low cost vitamin K tablets.

With these considerations, it is important for the prescriber to consider the patient as a whole when choosing an appropriate anticoagulant therapy. Patients who have demonstrated compliance with therapy and are at a lower risk for stroke (CHADS2-VASc score) may be more likely to benefit from NOACs therapy. However, in a patient with demonstrated non-adherence or high risk of stroke, the risk of adverse events may outweigh the benefit of no laboratory monitoring. As with all medications, it is vital that the prescriber and pharmacist provide detailed counseling for the patient regarding the therapy prescribed to ensure patient compliance. Patients should be alerted to the risk of stroke and bleeding. Patients taking NOACs should particularly be counseled on the lack of reversal agent.