The pathophysiology is believed to involve the migration of pluripotent mesenchymal cells into tissues surrounding the joint which then differentiate into osteoblasts, which in turn form mature bone.

This formation results in loss of range of motion of the affected joint as well as pain and inflammation experienced by the patient.

In patients with high risk for the development of this condition, prophylactic approaches include local radiation of the surgical area, indomethacin or other NSAIDS for two to six weeks following surgery or the use of bisphosphonate therapy such as etidronate. 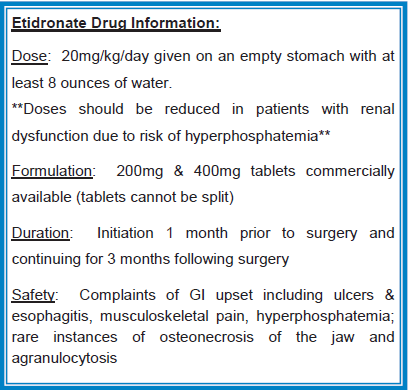 Efficacy data from clinical trials of etidronate in this setting is conflicting. Data from animal and in vitro models demonstrates the ability of etidronate to suppress the formation of mature bone in non-osseous environments; it does not reverse already established heterotopic bone.

However, human trials have demonstrated that the use of etidronate in long term prevention of heterotopic ossification following discontinuation does not differ significantly from placebo.

Moreover, once the medication is removed, normal bone formation will resume in approximately three to six months.

A more recent study by Vasileiadis and colleagues demonstrated that clinical outcomes in 56 total hip arthroplasty patients followed over 12 months did not differ significantly in either Harris Hip Score or radiographic evidence of heterotopic ossification between groups treated with etidronate or indomethacin.

Significant differences were noted with a greater incidence of adverse reactions (mostly GI upset) in the indomethacin group nd increased cost of therapy in the etidronate group.

In summary, etidronate is indicated for the prophylaxis of heterotopic bone formation following total hip arthroplasty and appears to be at least as effective as the use of indomethacin. However, long term data are equivocal between the two groups and etidronate has a significantly greater cost.