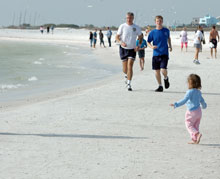 There is a saying in Southwest Florida: “Every day is a holiday!”

Of course, for a medical student there’s not much time for holidays, but there is something to be said about living in a community surrounded by all the features sought out by world travelers and major corporations – year-round sunshine, warm tropical climate, breathtaking sunsets, white sandy beaches, museums, operas, ballets and plays.

You can participate year-round in your favorite outdoor sports such as boating, golf, tennis, water skiing, fishing, soccer and more. The Sarasota/Bradenton area has been ranked by national media as one of the top 25 places in the United States to live. With an average of 238 sunny days per year, white sandy beaches and a rich cultural and arts community, it’s no wonder that the area is often referred to as “paradise.”

LECOM Bradenton is located about an hour south of Tampa and just a mile east of I-75. The I-75 South corridor takes you through Manatee, Sarasota and Charlotte counties, three counties that form the seventh-largest market in Florida and Florida’s third-fastest growing region. Over 600,000 people live in these three counties.

Within the cities of Bradenton and Sarasota, you’ll find island charm mixed with big city culture.

Sarasota is recognized as Florida’s Cultural Coast. One of the great contributors to that distinction is the Van Wezel Performing Arts Hall. Throughout the year, the Van Wezel offers top nationally and internationally acclaimed performances of Broadway musicals, entertainers, and world-class orchestras.

In April, Sarasota hosts its annual Film Festival. Visitors can explore the brightest new stars of independent film during 10 days of screenings, premieres, symposia and parties with filmmakers.

The Sarasota Opera House underwent a $20 million renovation and expansion and music lovers can look forward to seasons featuring Verdi, Puccini, Rossini and Mozart and more. The arts abound in both Sarasota and Bradenton. Just a small sampling of the offerings include the Village of the Arts near downtown Bradenton and the Towles Court Artists Colony near downtown Sarasota. Local artists’ work is promoted with Art Walks on the first Fridays and Saturdays monthly. In Sarasota, the world renowned Ringling Estate houses the John and Mabel Ringling Museum of Art, Circus Museum, and the spectacular Ca d’Zan waterfront mansion.

Marie Selby Botanical Gardens is a world of flora unto itself on 13 acres with a collection of more than 20,000 greenhouse plants and thousands more in the outdoor gardens on Sarasota Bay.

Bradenton’s LECOM Park has been the spring training home for the Pittsburgh Pirates since 1969 and touts some of the most affordable ticket prices in its league. The Baltimore Orioles play at Ed Smith Stadium in Sarasota. During the month of March, baseball fans can enjoy the Grand Old Game at its finest.

And, if you can’t find enough to keep you busy in Bradenton and Sarasota, traveling to areas around these two cities is easy, with quick access to Interstate 75. Tampa has the Tampa Bay Buccaneers, hockey’s Lightning and the Florida Aquarium; the Tampa Bay Rays and the Salvador Dali Museum in St. Petersburg are less than an hour north of Bradenton. Disney World’s many attractions and other theme parks near Orlando are about a 2.5-hour drive.

“I love living in Lakewood Ranch because it still has a small-town feel with all the benefits of living in the city. The new ‘Main Street’ has wonderful small shops and restaurants. But we are still in close proximity to larger malls as well.” – Bethany Steadman, second-year medical student from Southern California.